A lot of chefs would testify that a chef’s knife is used for 90% of the work done in the kitchen.

This makes it the number one priority in your arsenal.

But where the chef’s knife leaves off, the paring knife will pick up.

Paring knives are the go-to tool for intricate and precise cutting and slicing in the kitchen.

So it would be best to get a high-quality one.

Below, we take a look at one of the best paring knives in the game in this Zelite Infinity paring knife review. 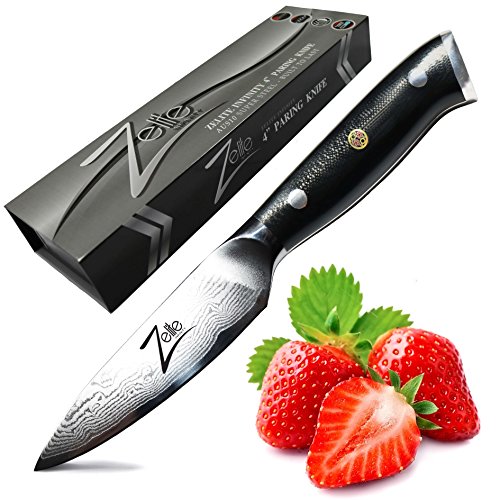 See more: The best paring knives your money can buy

While aesthetic value is far from the most important quality to look for in a knife, it would be a lie to say that it doesn’t hold any bearing.

This knife is a superb manifestation of quality craftsmanship, due to its functional, yet incredibly beautiful design.

The first thing that might catch your eye with this knife is the intricate Tsunami Rose Damascus pattern that is almost synonymous with Zelite Infinity knives.

While the knife’s blade is beautiful in its own right, the design is definitely supplemented by the triple-riveted, black, G10 rounded handle.

There are very intricate details on the center rivet and on the handle itself that, when blended with the blade, will truly catch your eye.

Not only does this knife catch your eye, but it’s also incredibly tough and built to last.

To add to that, the G10 material that was used to construct the handle is famous for being one of the most durable materials out there.

The paring knife is probably the second most important knife to have in the kitchen, which means you maybe be using it a lot.

Frequently using a knife that doesn’t have a proper balance or feels uncomfortable in your hand may result in kitchen work not being up to par, or even strain on your body, which is why it’s great that this knife is heavy and balanced properly.

The knife has a respectable weight of 2.08 ounces, and since the knife is full tang, the weight is very equally distributed throughout the whole knife. This usually results in quick and efficient kitchen work.

A Beast In The Kitchen

This makes doing all paring knife activities easy, from the extremely intricate tasks like hulling strawberries to tasks such as peeling a thick skin fruit. Another great addition to the knife is the Damascus pattern that not only looks incredible but also serves a purpose: making sure produce doesn’t stick to the knife.

This way, you can slice efficiently and quickly while also not having to worry about food sticking on your knife.

All in all, this is one of the best paring knives in the market today.

Zelite Infinity was able to craft a paring knife that does all the tasks one would expect from such a knife, while also putting it in such a beautiful package.

If you’re looking for a new paring knife, this one is should surely be on your list of considerations.

Hi, and welcome to my site. My name is Andy, and I’m a retired chef. I set up this blog to share with you my love for knives and cooking, as well as my personal experiences working as a professional chef. I hope you will find what I share on my blog helpful.

You can find out more about which cookies we are using or switch them off in settings.

This website uses cookies so that we can provide you with the best user experience possible. Cookie information is stored in your browser and performs functions such as recognising you when you return to our website and helping our team to understand which sections of the website you find most interesting and useful.

Strictly Necessary Cookie should be enabled at all times so that we can save your preferences for cookie settings.

If you disable this cookie, we will not be able to save your preferences. This means that every time you visit this website you will need to enable or disable cookies again.